The Long Story of Octavate

Octavate began as a music passion project from band founder, Josh Prost (also the leader and main contributor for Jack Prost Band). Sometime around 2017 (Josh will let me know if the date is wrong), long time musician, Josh, wanted to write music in the styles of music he grew up listening to and loving, and he picked up his bass to get started.  Next thing he knew, he had a dozen or so songs created and recorded with guitar, bass, drums, vocals, and sometimes more.  All created and recorded himself in his studio, with some occasional vocal, musician or mixing input from friends. But, Josh wanted more. He wanted a band to create with, record with, and tour with. He set on a journey.

Shawn had heard several of Josh's recordings and was also working on his own solo studio project, Special Victim. A mutual friend introduced them, and they decided to explore making music together. This was early 2019. Shawn had spent the previous 3 years mostly playing drums in a cover band and creating original music on his own.

When Shawn and Josh got together, Shawn took his spot on the drum throne, ready to lay down beats, but kept his microphone handy, just in case. Josh put his bass strap over his shoulder, and they got ready to build on a rhythm section; Josh also kept a microphone handy...just in case. But, they both knew that having a guitar player was needed to really get things started.

Long story short, that 2019 start, quickly fell flat. Shawn and Josh collaborated a bit on some songs, but Shawn wasn't ready to pull away from his other projects and Josh was ready to go.

Enter, Gilly and Matt. Matt, a kick ass drummer with speed, power and chops for days. Gilly, a rocking guitar player, who can truly play just about anything with ease. With Josh leading this trio, they got together every few weeks to learn some of Josh's creations, and a few well known rock/metal classics. They also tried out a few singers, just not finding the right voice and personality to round out a foursome.

End of 2019, Josh and Shawn reconnected. Shawn was finishing up some gigs with cover band Power Surge, and had started up a new Boston-based party band project with 15 other musicians, under the name Moosicians. Shawn, also was working on releasing new original music for Special Victim.  Yet, through some great conversations, Josh and Shawn decided to give it a go again, as the trio had some Spring 2020 gigs lined up. Shawn always is up for an opportunity to play music live. As of February 2020, the foursome quickly gelled, and set out to get a 10 song (mostly originals) set for some upcoming gigs beginning in March.  The "yet to be named" band, was progressing quickly....enter COVID-19. All band practices quickly stopped, Shawn got some symptoms, all gigs were canceled, and the 2020 roadmap was immediately halted. A couple good things did come out of March. The band decided on a name, Octavate, and Shawn put on his tech/social hat, to get this website and social media accounts set up.

As April 2020 came around, Josh and Shawn decided to make sure both their home studios were up and running, and that they would start recording as much as they could (even though the other guys weren't able to record from home). As we are now into the 4th month (July 2020) of the quarantine life, Josh and Shawn have recorded a handful of songs, though all are still considered "demos"; they are not quite ready for Spotify (at least that's their opinion). The plan is to write and record songs, to share with you, and get some interest in the new band.  Once there is enough for an EP or album, the band will work to get the songs ready for a wider audience (and will hide the demos back in the vault). So, let's see how the rest of 2020 plays out, and if there will be a 2021 Octavate release. Join us on this ride.

This song was inspired by the book "The Road"  by Cormac McCarthy.  It's an intense, personal story of post-apocalyptic America. Visions of walking through desolate scenes, hiding from people, knowing the may try to take advantage of you, feeling that you may be better off alone anyways. Maybe we all feel like this sometimes. Maybe the end of the world as we know it isn't the only catalyst for this scene.

My Wasteland. It's my wasteland.

My Wasteland. It's my wasteland. 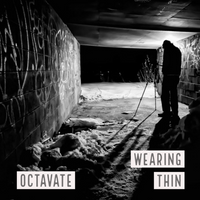 What started as a novel illness, shutdown of businesses, and people asked to remain at home; has evolved into ....well, we all know what it evolved into. "we're all in this together", "practice social distancing", "quarantine", "stay home". Some of us have experienced what this virus can do, and some will never come back from it.

Wearing Thin is our pandemic story, through our eyes (and our lungs). It has not been easy, and although some of us have our health (again), this is a long ways from being over.  Our patience is wearing thin.  Is yours? 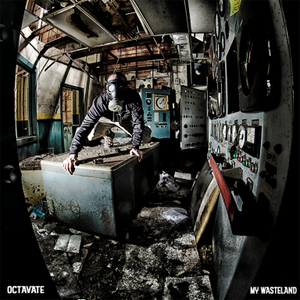 This is the forth week in a row that we have added a new song to the music player on our site. (You may notice they aren't available on Spotify or other streaming services yet.) These are actually just demos, not ready for official release.  Since the whole band is quarantined, getting together and recording music isn't easy.  None of us band members have been in the same room together since the beginning of March.

Fortunately, Josh is a song-writing machine, and can do a lot of recording from home. He's got a large catalog of songs that are in demo state. Shawn has been picking from those songs and laying down new vocals, from his home recording studio. Josh and Shawn have been sending song files back and forth.  Even though they may not have the final drums or guitars, we still want people to get familiar with who Octavate is and what our sound is.

So, please enjoy these demos. If you like, please share them with friends.  Also, we want to personally send you alternate takes, acoustic versions, and remixes. Please join our mailing list, so we can send you these exclusive songs, that are not available anywhere.

Now, this is week 4 of 4. This week, we introduce My Wasteland, a post-apocalyptic song, we hear some Soundgarden and Tool influences in it. What do you hear? This is a song that was in Josh's catalog. Shawn added a few additional lyrics, and made some slight changes to the vocal melody, and we are happy where it's at.  The drums are not the finished drums, and I can imagine we may have some guitar changes down the road. Enjoy this new song that we are proud to share.